How to Calibrate Touchscreen Devices

From Userful Support
Jump to navigationJump to search

HID-compliant means touchscreen device follow the standard USB-HID specification (see WIkipedia on HID for more info). The linux kernel automatically detects these devices and uses the hiddev module to export it as a generic input device.

Userful Multiplatform™ supports touchscreen devices that provide evdev event device under Linux. It should work out of the box with the majority of touch screens on the market.

If you have a touch screen, you can quickly test compatibility following the steps below, if you are purchasing a new touch screen be sure to ask your vendor if the touch screen works out of the box with Linux (without requiring installation of an additional driver).

The following TouchScreens have been specifically reported as working with Userful Multiplatform™:

Testing Compatibility with Userful Multiplatform (v7.1 and higher): There are a broad range of touch screens in the market, many will work without any manual setup. Simply connect your touchscreen device into a zero-client device and reboot your host PC, If the touch-screen is recognized as a supported device you will see the graphical touch screen calibration interface appear on the touchscreen (after host PC completes its reboot).

Testing Compatibility prior to installing Userful Multiplatform: Prior to Multiplatform installation, for touchscreen to work, it must be supported by the Linux kernel (e.g. by the USBTouchScreen module). That means there exists a /dev/input/event* node for your device.
To test type the following command (to see if your device is listed) on terminal:

To confirm that it is working, type:

replacing "?" with the event numbers for each of your event nodes while touching the display.

If you found the corresponding node, it's likely that the device is working properly.

You need to touch (or press) the intersecting point of red lines (as shown in fig). After you touch first point, second point will appear then third, and fourth. 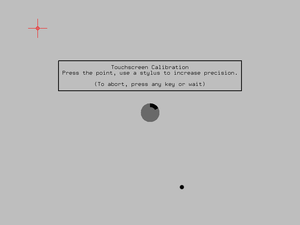 If you have missed a point the process will start over until you have precisely pressed all four points.

How to verify calibration?

Once you have completed the calibration process you will first need to verify the accuracy of calibration before saving the configuration. You can do this by pressing the display on multiple points, observe whether the mouse pointer is following your touch. The calibration interface will give you time to do that and you will see the progress bar after your first touch. 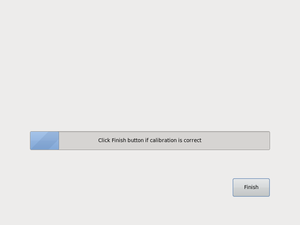 Once you are satisfied with the calibration you can press “Finish” button to save it.

If calibration is not correct (and “Finish” button is not pressed), calibration wizard will start again after the progress bar runs out of time.

If at some point you need to recalibrate your touchscreens. You can also manually launch the calibration tool from Control Center > Display Management.

As shown in fig, Calibrate button will be shown under Display Management section in front of each station if it has a touchscreen device.

Depending on your touch-screen device, re-calibration may be required each time you change to a new display resolution. You can pre-emptively switch to and calibration all the planned resolutions at once, after which these calibrations are saved and available to the system and you can then change resolutions and used the previously saved/stored calibrations at will without having to perform the calibration process.